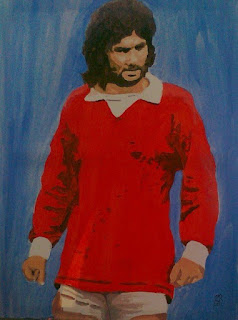 George Best (22 May 1946 – 25 November 2005) was a Northern Irish professional footballer who played as a winger for Manchester United and the Northern Ireland national team. In 1968, he won the European Cup with Manchester United, and was named the European Footballer of the Year and FWA Footballer of the Year. The Irish Football Association described him as the "greatest player to ever pull on the green shirt of Northern Ireland".


Born and brought up in Belfast, Best began his club career in England with Manchester United, with the scout who had spotted his talent at the age of 15 sending a telegram to manager Matt Busby which read: "I think I've found you a genius."[3] After making his debut for United aged 17, he scored 179 goals from 470 appearances over 11 years, and was the club's top goalscorer in the league for five consecutive seasons.[4]
One of the greatest dribblers of all time, his playing style combined pace, skill, balance, feints, two-footedness, goalscoring and the ability to beat defenders.[5][6][7] Best unexpectedly quit United in 1974 at age 27, but returned to football for a number of clubs around the world in short spells, until retiring in 1984, age 37. In international football, he was capped 37 times and scored nine goals between 1964 and 1977, although a combination of the team's performance and his lack of fitness in 1982 meant that he never played in the finals of a European Championship or World Cup.
Best was one of the first celebrity footballers, earning the nickname "El Beatle" in 1966,[8] but his subsequent extravagant lifestyle led to various problems, most notably alcoholism, which he suffered from for the rest of his life. These issues affected him on and off the field, at times causing controversy.[9] He said of his career: "I spent a lot of money on booze, birds [women] and fast cars – the rest I just squandered".[10] After football, he spent some time as a football analyst, but his financial and health problems continued into his retirement.[9] He died in 2005, age 59, due to complications from the immunosuppressive drugs he needed to take after a liver transplant in 2002.[11] Best was married twice, to two former models, Angie Best and then Alex Best. His son Calum Best was born in 1981 from his first marriage.
Before he died, Best was voted 8th in the World Soccer 100 greatest football players of the 20th century election in 1999 and was voted 16th in the IFFHS World Player of the Century election in 1999. He was on the six man short list for the BBC's Sports Personality of the Century in 1999. Best was one of the inaugural 22 inductees into the English Football Hall of Fame in 2002. In 2004, he was voted 19th in the public UEFA Golden Jubilee Poll and was named in the FIFA 100 list of the world's greatest living players. Former Brazilian footballer Pelé stated, “George Best was the greatest player in the world". Best was once quoted as saying, “Pelé called me the greatest footballer in the world. That is the ultimate salute to my life.”[12] On what would have been his 60th birthday, Belfast City Airport was renamed the George Best Belfast City Airport. According to the BBC, Best was remembered by mourners at his public funeral held in Belfast as "the beautiful boy" [with a] "beautiful game".[13]
Mark Garnett and Richard Weight have explored the enduring appeal of George Best.

The British like their heroes to be tragic ones: possessed of enough glamour and talent for stardom to be lived vicariously through them; yet flawed and vulnerable enough for the public not to be threatened by their success.[14]

Posted by Matthew Rhodes at 08:19 No comments:

Clint Eastwood - The Good, The Bad and The Ugly 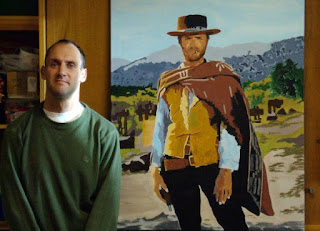 The Good, the Bad and the Ugly (Italian: Il buono, il brutto, il cattivo, lit. "The good, the ugly, the bad") is a 1966 epicSpaghetti Western film directed by Sergio Leone and starring Clint Eastwood, Lee Van Cleef, and Eli Wallach in their respective title roles.[5] Its screenplay was written by Age & Scarpelli, Luciano Vincenzoni and Leone (with additional screenplay material and dialogue provided by an uncredited Sergio Donati),[2] based on a story by Vincenzoni and Leone. Director of photography Tonino Delli Colli was responsible for the film's sweeping widescreen cinematography, and Ennio Morricone composed the film's score including its main theme. It was an international co-production between Italy, Spain, West Germany and the United States.
The film is known for Leone's use of long shots and close-upcinematography, as well as his distinctive use of violence, tension, and stylistic gunfights. The plot revolves around three gunslingers competing to find fortune in a buried cache of Confederate gold amid the violent chaos of the American Civil War (specifically the New Mexico Campaign in 1862), while participating in many battles and duels along the way.[6] The film was the third collaboration between Leone and Clint Eastwood, and the second with Lee Van Cleef.
The Good, the Bad and the Ugly was marketed as the third and final installment in the Dollars Trilogy, following A Fistful of Dollars and For a Few Dollars More. The film was a financial success, grossing over $25 million at the box office, and is credited with catapulting Eastwood into stardom.[7] Due to general disapproval of the Spaghetti Western genre at the time, critical reception of the film following its release was mixed, but it gained critical acclaim in later years. The Good, the Bad and the Ugly is now seen as one of the greatest and most influential Westerns of all time.
Posted by Matthew Rhodes at 08:11 No comments: 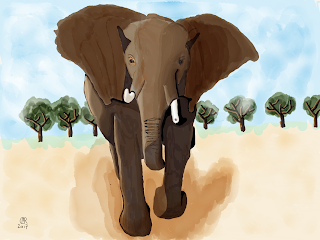 My Elephant on the run!

Posted by Matthew Rhodes at 11:19 No comments: 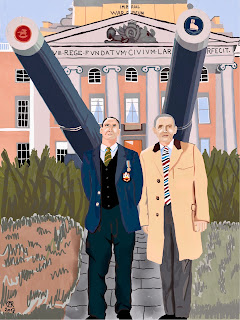 This iPad artwork is done of Major-General Nick Caplin CB, who is a retired British Army officer who commanded United Kingdom Support Command, and is now Chief Executive Officre for the Blind Veteran's UK and me outside the Imperial War Museum. Inside the museum I had photos taken of my huge BVUK painting of 13 members of the charity. Nick Caplin served in Bosnia exactly the same time and place as I did in the summer tour of  1995 as BRITBAT 1.
Posted by Matthew Rhodes at 11:03 No comments: 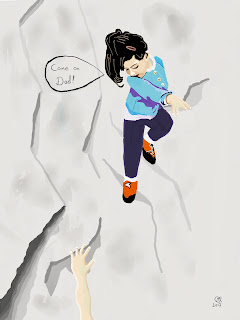 A painting of my niece Coco climbing with her dad' my brother Steve!
Posted by Matthew Rhodes at 14:07 No comments: 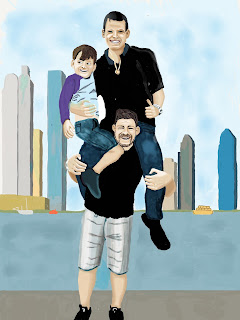 "The Tallest Skyscraper" is a ipad art of Lee, my son-in-law, and his brother-in-law and nephew.
Posted by Matthew Rhodes at 12:23 No comments:

Just down the steps 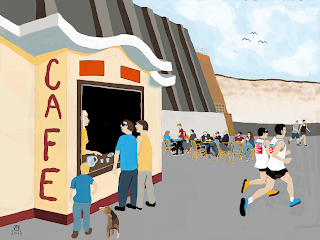 Here's my painting called, "Just down the steps". This is of a painting I've down of the cafe which is just down the cliff steps by Ovingdean BVUK.
Posted by Matthew Rhodes at 12:14 No comments: